The Gardening club (園芸部, Engei-bu?) is one of the clubs at Cherryton Academy, in which a group of students with a shared interest in gardening and plants get together and run it.

The club is located on the rooftop of one of the school's main buildings. It has a stone archway, various plants, flowers, and a few trees and bushes. It also has a wooden clubroom where the students would usually converse.

The club grows all the plants and flowers that are used in certain ceremonies, even in productions made by the drama club. Despite this, however, the club is one of the least popular clubs at school, as it currently has only one member, Haru. According to Haru, there used to be two other members, but they graduated 4 years ago, and no one new has joined ever since.

Haru is the club's sole member and de facto leader.

This was the first time Legoshi met Haru face to face. Legoshi went with Kibi to get flowers for the drama club, but was abandoned soon after, leaving him face to face with Haru. Haru was more than happy to help give Legoshi the flowers he needed if she got a bit of help around the garden.

Louis went to hide in the club because his antlers shed earlier than he expected. When Haru came, he tried to bribe her to keep quiet. They started having occasional friends-with-benefits intercourse in the clubroom since then, which ended when Legoshi got involved with Haru. 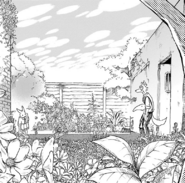 The gardening club in the manga.

The gardening club in the anime.

Full view of the club.

Community content is available under CC-BY-SA unless otherwise noted.
Advertisement