The Drama club (演劇部, Engeki-bu?) is a club from Cherryton Academy.

One of Cherryton Academy's most popular clubs, in which both carnivores and herbivores meet to practice/perform plays.

At the beginning of the series, the club had 33 members, with the Club Advisor scouting anywhere from 10 to 20 junior high school students every year. The club's leaders are selected from this pool.

Only members who can handle the intense rehearsals and strict hierarchical relationships between junior and senior members are able to function within the club.

The arc begins with Tem the alpaca being murdered (presumably) by a carnivore. This severely affects the way the herbivores of the club see the carnivores, causing mistrust and genuine fear, which ends in a brief yet pivotal discussion between Bill and Ellen. After working it out, the club then turns their focus towards making all the preparations for their next presentation, this being the first performance of the club after the death of one of its members.

All academy clubs must participate in the festival, the drama club being one of them. They were required to decorate an attraction, in which all members participated. They did not have a presentation for this festival.

Lastly, the club is divided into the following groups: 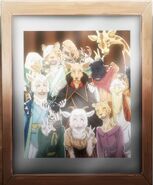