Cherryton Academy (チェリートン学園, Cherīton gakuen?) is a school featured in the Beastars.

Cherryton is a boarding school, which has numerous buildings with a vast number of classrooms, clubs and such for its students. It also has four separate dormitory buildings, where the students sleep. Each one is meant for carnivores and herbivores of each gender. The room assignment is basically designed so that it is shared by animals from the same family. For example, room 701 is made up of canines (Legoshi, Jack, Collot, Durham, Miguno and Voss).

The school comes with its own shop, which supplies uniforms, stationary, and a kiosk for quick food such as sandwiches.

The school also has its own newspaper called the 'School Wave', which is run by the PR Department.

Its students are all given ID cards, which are used for a variety of purposes, including photo identification, and can provide access to such amenities as borrowing books at the school library, attending school events, and receiving discounts at local stores and movie theaters.

The school is located on top of a hill, so the city center is quite far away. The academy's emblem looks like a triangle, but it's actually a paw print. Reptiles at the school, who don't have paws, don't seem to like the emblem.

Cherryton has its own uniform for male and female students, which is the same for both carnivores and herbivores. The school changes its uniform to fit the season.

In the cold seasons, their uniform consists of a white shirt, an indigo vest, dark gray tie, gray pants with a darker vertical line pattern, and brown loafers. They also have a green blazer with the school's crest on its left breast-pocket, but most students prefer not to wear it except for the odd few, such as Louis.

In the summer, their uniform loses the shirt, vest and tie, and replaces it with a blue polo shirt.

In the cold seasons, their uniform consists of a white long-sleeved dress with a small bow-tie, a long, knee-length skirt, a yellow belt, white socks, and black Mary Jane shoes. The material for the uniform is supposedly thicker, thus warmer.

In the summer, their uniform is mostly the same, except they have short sleeves that end in bunches at their shoulders. The material for it is supposedly thinner, thus cooler.

Cherryton also has its students wear a secondary uniform, which just consists of a white shirt and a pair of red trousers or shorts. So far, only the Drama Club appears to wear this, which they do during club-time, rehearsals or stage-work. The males seem to wear the long-pants, while the females wear shorts.

Cherryton seems to be quite a famous school, as even Gohin and the Shishigumi know about its elite status.

Cherryton Academy is stated in Chapter 53 to have the "highest number of talents". These include:

Conceptual Art of Cherryton Academy viewed from above.

Conceptual Art of the back of Cherryton Academy's theatre.

Common room in the boys' dorms. 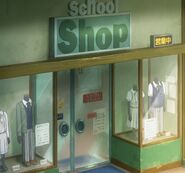